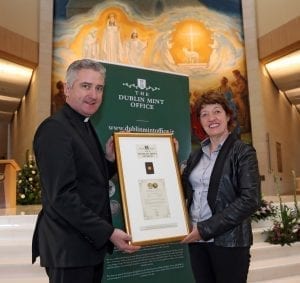 To mark the launch of the Pope John Paul II 40th Anniversary Medal Set, the Dublin Mint Office presented Knock Shrine with a gift of the commemorative medal and certificate.

The new limited edition medal is to celebrate the 40th anniversary of Pope John Paul II’s historic visit to Ireland. This memorable occasion marked the first visit to Ireland by any Pope and the centenary of the Apparition at the Shrine of Knock in August 1879. The company has donated a medal to Knock Shrine, which was one of the sites visited by the Pope during his historic visit.

The medal was presented to Father Richard Gibbons on Tuesday 29th October by the Country Manager for The Dublin Mint Office, Kathy Clarke.

One side of the medal displays an image of Pope John Paul II, surrounded by Polish religious motifs and his papal name written in Polish. The reverse design displays the Pope’s coat of arms, with the dates 1979 and 2019, complete with the inscription of both his papal name and Polish birth name, Karol Wojtyla.

Father Richard Gibbons said: “I would like to thank The Dublin Mint Office on behalf of Knock Shrine for this very special gift and for recognising the history of the Shrine in relation to his Holiness Pope John Paul II and his visit to Ireland. It is a wonderful reminder of such a historic moment for the Catholic Church in Ireland in this unique way.”

Kathy Clarke, Country Manager for The Dublin Mint Office, said: “The Dublin Mint Office is delighted to launch these medals, which celebrate one of the most important moments in the history of the State. I hope our customers enjoy the medal and that it helps them to feel a connection to a very special moment in Irish history. I am also delighted to be able to donate a medal to Knock Shrine and I would like to thank Father Gibbons and the staff of the Shrine for being so welcoming to us.”