February Book of the Month 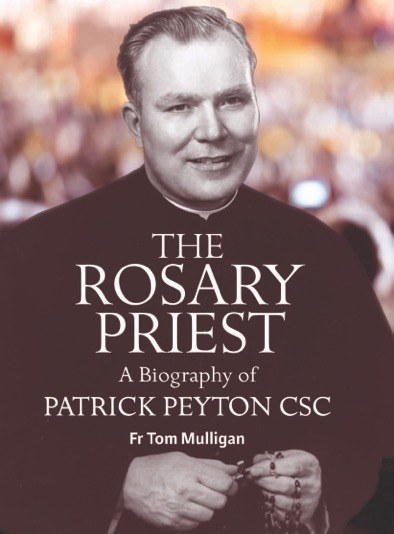 ‘The Rosary Priest: A Biography of Patrick Peyton CSC’ by Fr. Tom Mulligan  is this month’s book of the month as chosen by the team at Knock Shrine Book Shop

Father Peyton’s sense of his own mission led him to make a total commitment to his work, and he pursued that with a holy passion every moment of his life, even when he was resting and not working. He was totally engrossed in fulfilling his mission. It was his reason for being.’ Mary Jane McQueen

Mayo-born Fr Patrick Peyton became famous in the mid-twentieth century for championing the power of prayer with his mantra ‘the family that prays together stays together’ and for travelling the world with Family Rosary Crusades that attracted thousands of devotees. The Rosary Priest brings to life this devout and charismatic figure who became a household America where he produced hit radio shows and films that captivated tens of millions and starred such Hollywood luminaries as Bing Crosby, James Dean, Grace Kelly and Loretta Young.
This wonderful biography explores Fr Peyton’s mission to share the gift of the Rosary with the world, a decision largely inspired by his astonishing recovery from tuberculosis as a young man, which he attributed to the intercession of the Virgin Mary. This book celebrates a remarkable figure in Irish Catholicism who, from humble beginnings in a poor west of Ireland family, criss-crossed the globe converting millions to his simple message of family prayer.