The Mass was filmed by Kairos Communications and will be broadcast on RTÉ 1 Sunday 13 May at 11am.

This year marks the 5th Anniversary of Donal Walsh, the Kerry teenager who touched so many lives with his powerful message to “live life”!

To celebrate his legacy, the Youth Ministry at Knock Shrine invited all TY and 5th year students from all over the country to come together to celebrate his life and his message.

There were a number of high-profile guest speakers present on the day, including Joe Schmidt and Ian McKinley who addressed a crowd of over 3,000 students.

Ian McKinley spoke about the importance of having a positive mind-set, sharing his personal story of overcoming adversity and adapting to follow his passion. After playing six times for Leinster, he was forced to retire from rugby after losing sight in his left eye. However, despite the blindness in one eye, he made a return to rugby in 2014 in Italy using specially manufactured goggles. 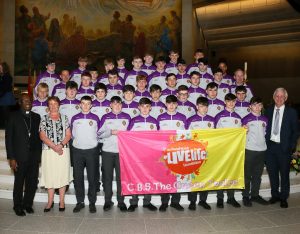 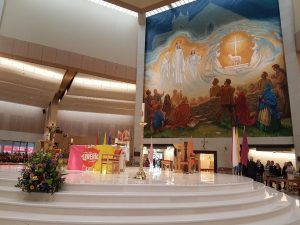 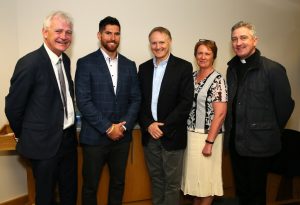 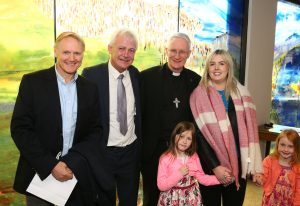 Towards the end of his speech he quoted Donal Walsh, saying these were three things Donal said that have changed his life; the importance of opening up and telling someone of you are going through a hard time; to have faith that things will get better and that “..In the darkness…a door will open.” He also spoke about the importance of “leaving no stone unturned”, about leaving your fears behind in order to live a happy and  fulfilling life.

Joe Schmidt encouraged students to maximise their talents and the importance of friendship. “If you see that one of your friend’s is struggling, in a dark place and can’t see the door, remember that you can be the door for that person. You can be the one that makes a difference by listening and by being there to support them.” He also spoke about the importance of courage and resilience and how Donal Walsh’s legacy is an example to us all. “Donal had wonderful courage and fortitude, to have lost battles, endure pain in the knowledge that there would be no recovery, to speak out and inspire others and show such courage and maturity is hugely inspirational and influential.”

Other speakers included Fr Philip Mulryne who played for Manchester United before joining the priesthood, Fr. Dermot Donnelly, brother of Declan Donnelly of ‘Ant & Dec’, and Istvan Markuly a Permaculturist from Cork who motivated students to think about the environment and the various ways we can care for our common home.

Nicola Mitchell, director of Knock Youth Ministry commented “Donal Walsh was a truly inspirational individual and such a wonderful example to us all but particularly to young people. Our hope is that young people leave here knowing that they are loved by God and motivated to go and live life to the full. Throughout the day, young people have heard from a variety of speakers who have encouraged and motivated them follow their dreams and be the people God has called them to be.”

Mass was celebrated the Basilica with Archbishop Jude Thaddeus Okolo, Papal Nuncio and Most Rev Ray Browne, Bishop of Kerry.