The concert will commence at 7.30pm and doors will open at 6.30pm. Admission is by reserved ticket only and early booking is recommended.
Tickets cost €30 and €25 and are  available  online at www.knockmessiah.com and also from the Development Information Office at Knock Shrine (located beside Knock Basilica), online from Eventbrite.ie or at IT Music, Cavendish Lane , Castlebar & 7 Forster Court, Galway City.

Have a look back at the wonderful time we had last year!

Early booking is advised as tickets are selling fast! 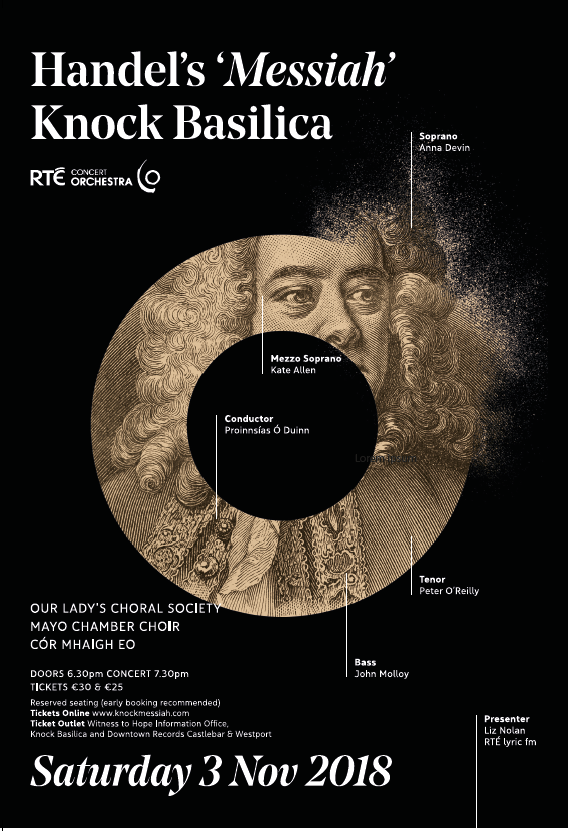 Following last November’s unprecedented sell-out performance of Handel’s Messiah at the Knock Basilica, the trumpet shall sound once again on Saturday 3 November with the return of the RTÉ Concert Orchestra for the second  performance at the Basilica  of the world’s most famous and beloved oratorio, renowned for stunning choruses and arias.

Featuring the RTÉ Concert Orchestra conducted by Proinnsías Ó Duinn, with a 180-strong choir and an incomparable line up of soloists, this will be a sensational evening of delightful and thrilling music making.

Tenor Peter O’Reilly is a graduate of the DIT Conservatory of Music and Drama and has been a very successful prizewinner in the ESB Feis Ceoil, most recently winning the Cuisine de France John McCormack Bursary.   His engagements to date take him from Dublin to the Buxton Festival and include two world premieres

Our Lady’s Choral Society was founded in Dublin in 1945 and in its annual performances appears regularly at the National Concert Hall with the National Orchestras. The coming together of OLCS with members of the Mayo Chamber Choir and Cór Mhaigh Eo will create a 180-strong choir to raise the roof of the Basilica in the breathtaking choruses, such as the Hallelujah and the great Amen.