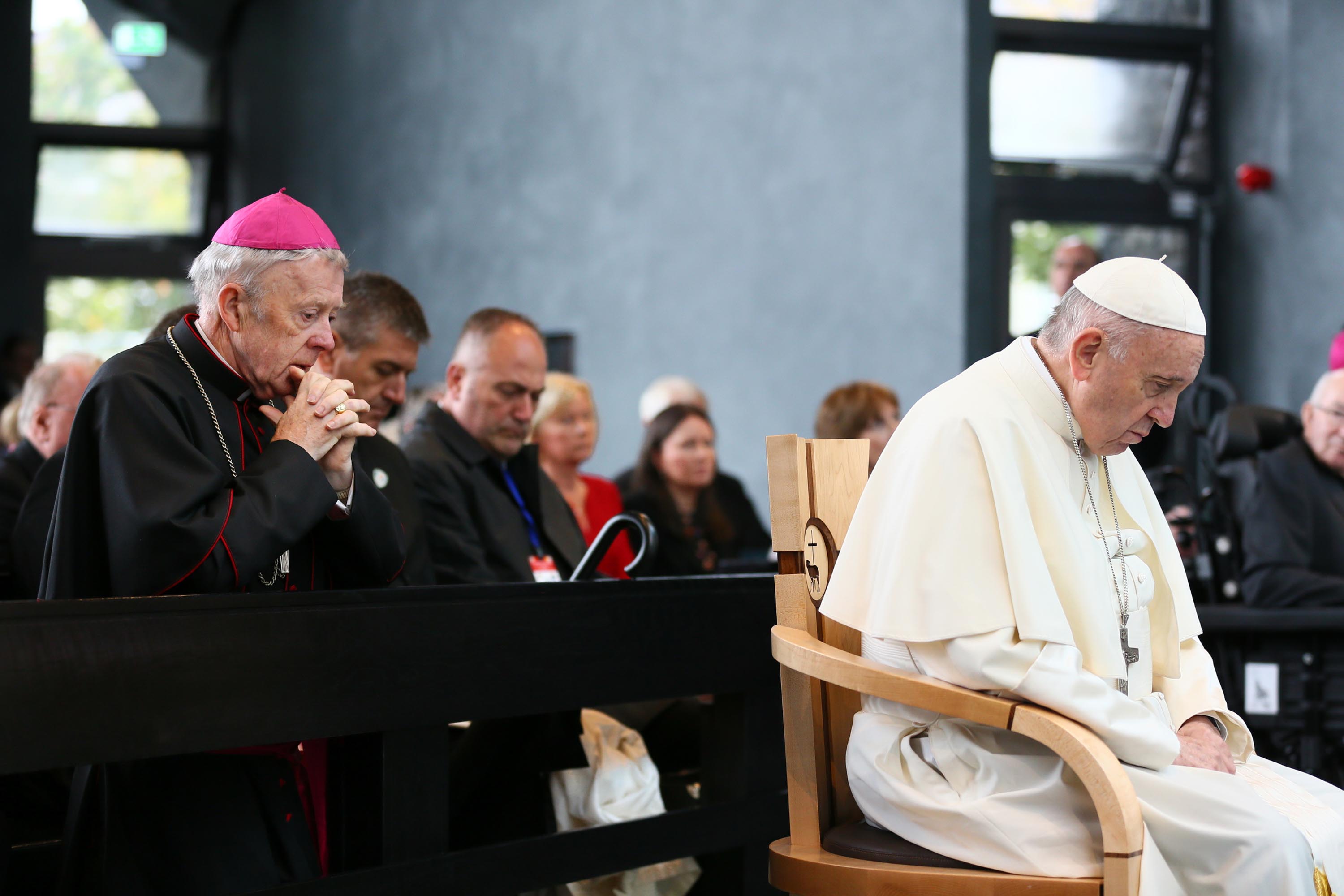 On the occasion of his historic visit to Knock Shrine, Pope Francis gifted the Shrine a set of  beautiful rosary beads.  The rosary beads  are now on display along with the Golden Rose that was gifted to the Shrine by Saint Pope John Paul II during his visit in 1979. Also on display is the Papal candle that was lit by His Holiness at the Apparition Chapel  just before he sat in silent reflection at the site of the Apparition. The beeswax candle incorporates the symbol of the Lamb and The Cross and the Papal insignia. The display cabinet is located adjacent to the Apparition Chapel at the main entrance to the Parish Church sacristy.

Fr. Richard Gibbons. Rector, Knock Shrine  & Archbishop Michael Neary presented His Holiness with  a mosaic of Our Lady of Knock which is a detailed representation of the face of Our Blessed Mother from the Apparition mosaic in the Basilica. 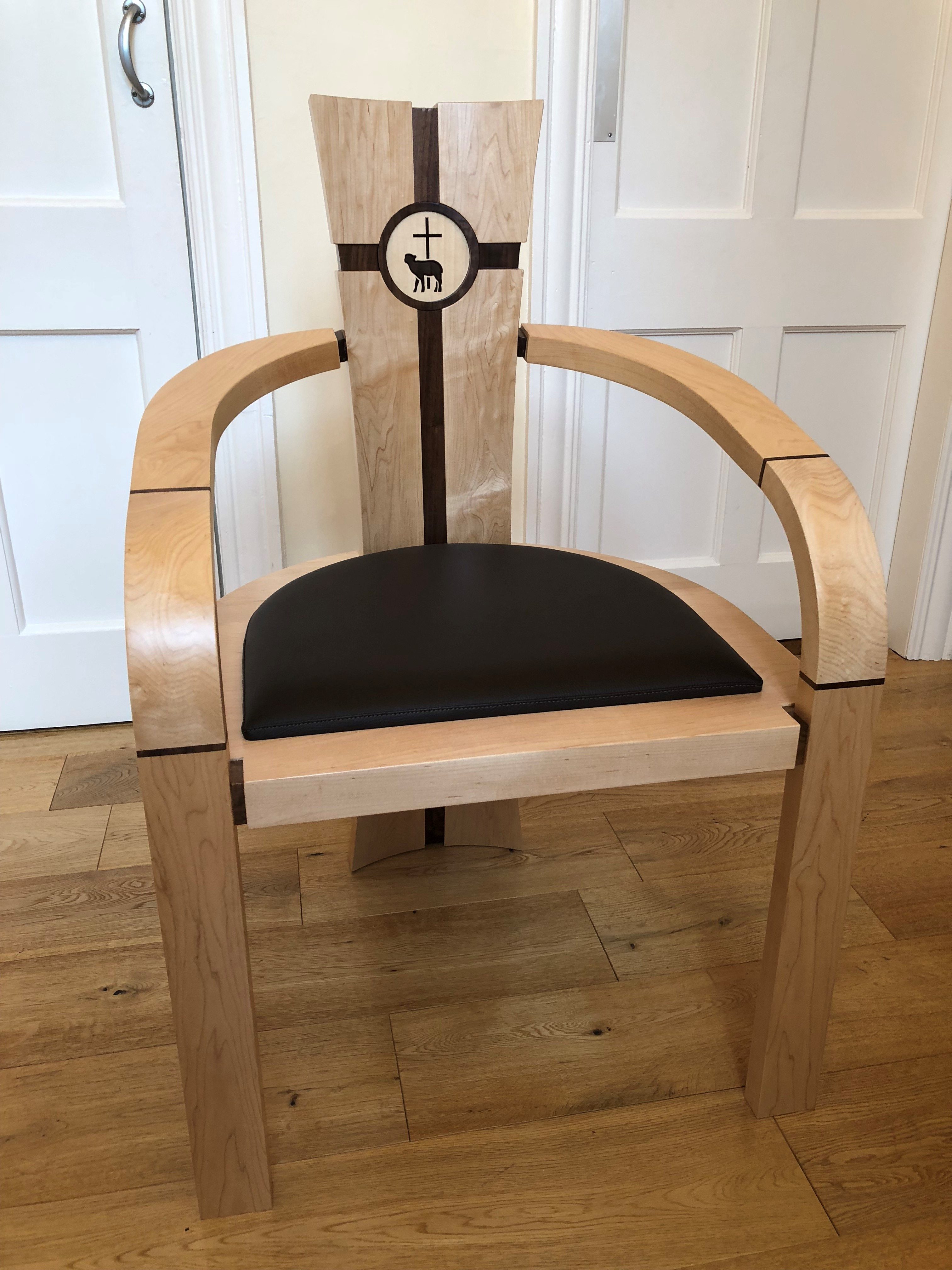 The chair is inspired  by a family dining chair, inspired by  traditional three-legged stick chairs often seen in Ireland & Wales. It symbolises the family, the importance of family prayer and in particular the reciting of the rosary as a family. Designed by Gavin Duignan and his craftsmen at ICS Church Furnishers, Dromod , Co. Leitrim,  it is indeed a beautiful piece of craftmanship.

Describing the work undertaken in the crafting of this chair, Gavin tells us:

[blockquote animation=”” author=”” ]The brief for the chair was to create a modest family kitchen-like chair so I gained my inspiration from a traditional three-legged stick chair often seen in Ireland and Wales. The central back panel in maple is shaped to represent Christ in life while the black walnut cross is significant in that he died for us. The continuous arms of the chair signify Christ’s unending love for us. In this World Meeting of Families 2018, the open arms are welcoming forgiving and loving all in one. From the onset Pope Francis has been a humble man and I felt it important that the chair too would be humble. In olden times the armed version has been described as a throne for a common man. I can only hope that Pope Francis feels it reflects his humble teaching. The chair is made from solid walnut and maple and uses the contrast of the two timbers to great effect.[/blockquote] 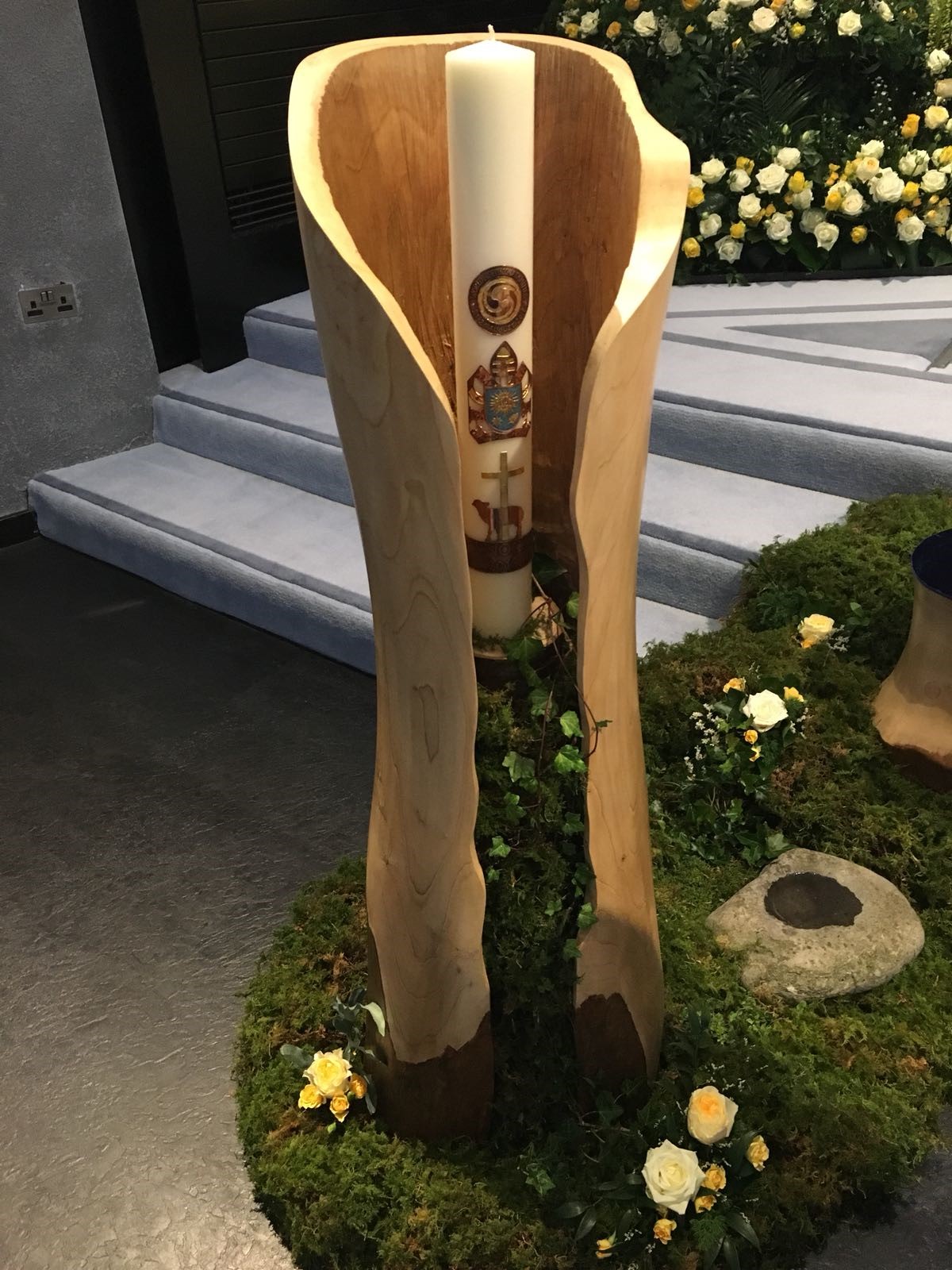 The work of Anne Lavin and the Shrine gardening team, the floral display centres on a candle, resting in the hollowed-out trunk of a storm-damaged tree carved by local man, Tom Cunnane and his son Thomás.  Amid the dead and chiselled wood, the candle symbolises the light of hope, spoken of by the witnesses of the apparition. The people at time in 1879 were marked by famine, homelessness, uncertainty and poverty. The centre of the tree features rough strokes, representing the marks of life’s experiences and hurt but the light shines through, rising above the brokenness and casting light. For God is with us even in our brokenness – His light shines through to dispelling darkness.

Among the plants in the display are shamrocks and other shrubs, planted by the Bishops of Ireland at the end of their Spring Retreat in Knock. They remind us  in a very particular way, of Pope Francis’ call in his Encyclical on the Environment, “Laudato Si” (2015), to every person to fulfil his/her moral duty to care for our common home. To the right of the display is a stone water font, representing the life-giving waters of baptism.

The pewter reliefs on the simple beeswax candle were designed by Trudy Burke from Newcastle, Co. Down. The inscriptions include the Papal Insignia and the Lamb and The Cross,  which are unique to the Knock Apparition. Pope Francis was invited to light this special candle in the Apparition Chapel as a symbol of the light of hope spoken about by the witnesses to the Knock Apparition in 1879.