Pope Francis, through the Pontifical Council for the promotion of the New Evangelisation, will officially recognise the unique status of Knock as an International Marian and Eucharistic Shrine on the 19th March, the Feast of St Joseph.

In December last year, Pope Francis declared 2021 as the year of Saint Joseph, a declaration that bears particular significance for Knock as St Joseph appeared, together with Our Lady, St John the Evangelist, and the Lamb of God in the Apparition in 1879. Pope Francis visited Knock Shrine in 2018 as part of the World Meeting of Families celebrations.

Pope Francis will deliver a special message via video link recognising Knock Shrine as an International Marian and Eucharistic Shrine during evening Mass on Friday the 19th March next. The Mass will be celebrated by Most Rev. Michael Neary, Archbishop of Tuam and concelebrated by Fr Richard Gibbons, PP and Rector of Knock Shrine. The 19th of March is also the day that Pope Francis will celebrate the 8th anniversary of his inauguration as Pope. 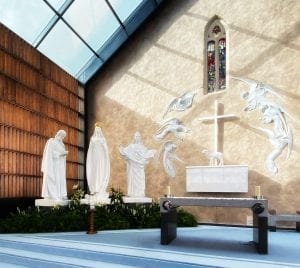 The Apparition scene at Knock has deep liturgical meaning, symbolic richness and has been the subject of theological study and contemplation for generations. Unique to the Apparition at Knock is the representation of the Eucharist as the risen Lord which appeared as the Lamb on the altar, standing before his Cross and surrounded by a host of angels. This aspect of the Apparition was detailed by the fifteen witnesses who, on the 21st August 1879, stood in pouring rain for two hours reciting the rosary before the Apparition scene.

“Since the time of the Apparition, Knock Shrine has been a place of hope and given comfort and consolation to people. The completely unique nature of the Apparition scene is something that has fascinated and inspired people for generations. We are truly grateful for this recognition from Pope Francis, through the Pontifical Council for the Promotion of the New Evangelisation, which recognises Knock on an international level in terms of its special status as Marian and Eucharistic Shrine. I wish to sincerely thank Archbishop Rino Fisichella, President of the Pontifical Council for the Promotion of the New Evangelisation and Archbishop Michael Neary, Archbishop of Tuam, without whom this would not be possible. This is an historic milestone for Ireland’s National Marian and Eucharistic Shrine.”

Over the course of the pandemic Knock Shrine has led the way in helping people to engage with their faith and offered daily religious services online. On 22 November last year, for example, the Shrine celebrated a special Mass of Remembrance for all who had died on the island of Ireland from Covid-19. Over 120,000 people joined in the Mass online. 3,000 candles were placed around the sanctuary of Knock Basilica, one candle to represent each person who died due to Covid-19 up to that time.