Our young volunteers were a friendly, colourful sight here at Knock Shrine throughout the pilgrimage season. 50 young students from St. Colman’s college Claremorris, Mount St. Michael Claremorris and St. Louis’ Community School, Kiltimagh assisted at our ceremonies at Knock Basilica as part of their participation in the John Paul II awards programme.

“Dear young people, let yourselves be taken over by the light of Christ, and spread that light wherever you are.”
– St. Pope John Paul II

The Pope John Paul II Award is a faith achievement award for young people between the age of 16 and 18. It is non-competitive, inclusive, flexible and voluntary. 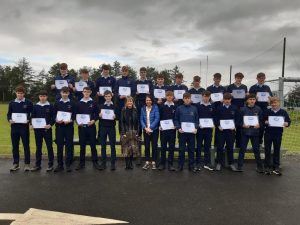 The Award enables participants to take an active part in the life of their Church – in the life of their community and society. It enables young people become more aware of the teaching and role of the Catholic Church in the world and to engage at a deep level with Christ. The Award was created to commemorate the late Pope Saint John Paul II who was so committed to young people and who had such belief and confidence in them.

We are very grateful to these young people for their kindness, their energy and for giving so generously of their time  at Knock Shrine throughout the summer months.