Planning Your Visit to Knock Shrine

We look forward to welcoming you to Knock Shrine. Set in over 100 acres of beautifully landscaped gardens, Ireland's International Eucharistic and Marian Shrine offers you the opportunity to take time for personal prayer and reflection.

The following information will assist you in planning your time, whether a few hours or a few days, here at Knock Shrine. Please select from the menu below. 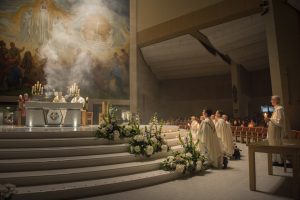 Masses are celebrated throughout the day at Knock Shrine, with musical accompaniment by a cantor and organist. 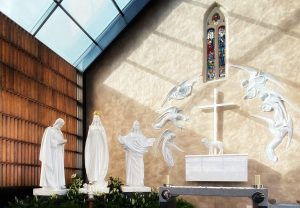 This glass  chapel encompasses the gable wall of the Parish Church, site of the Apparition. The stunning Carrara  marble tableau is an exact representation of the Apparition, as described in the Witnesses’ accounts.

The Chapel is open for private prayer daily from 8am to 9pm. 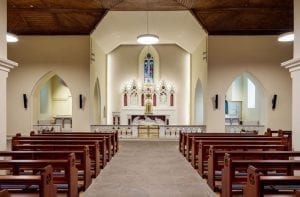 This historic Church was constructed in 1828. Key features in this Church include examples of stained glass windows by Harry Clarke and Harry Clarke studios. The impressive high altar and Pieta scene in the sanctuary were gifted to Knock Shrine in 1880.

The stunning interior of Knock Basilica can be equally described as aesthetically beautiful and spiritually uplifting.

Key Points Of Interest include: 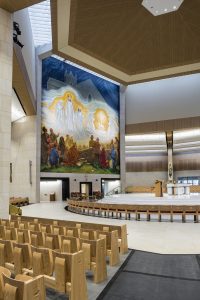 The Apparition Mosaic is one of the largest of its kind in Europe and is composed of over 1.5 million individual pieces of mosaic glass.

Ireland’s Ecclesiastical past is represented in reconstructed windows from Irish medieval Churches on each of the radiating walls of the Basilica represent each of the four provinces of Ireland.

Knock Basilica is open daily from 8am to 9pm

Lighting a candle at Knock and taking a few moments to pray for a loved one is a very special and prayerful experience.

The team at the outdoor candelabrum at the Parish Church will light candles on your behalf. 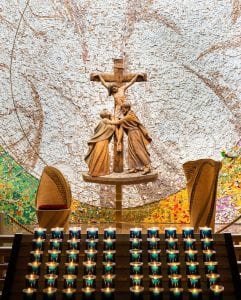 The Chapel of Reconciliation will be closed throughout January and February for refurbishment works taking place. For those with limited mobility, please note that our Shuttle Service is operational to transport pilgrims around the Shrine grounds. If you wish to avail of this service, just ask a member of staff.
Confessions and Adoration will be available at St Brigid’s daily at the usual time from 11am -3pm.

Unique to the Knock Apparition is the representation of the Eucharist in the appearance of the Lamb on the altar. Knock Shrine was elevated to the status of International Eucharistic Shrine by Pope Francis in 2021. 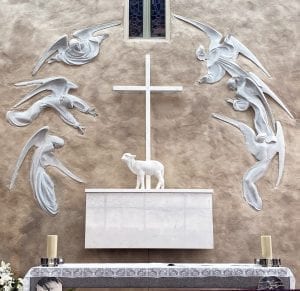 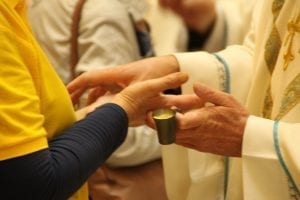 Through the Sacrament of  anointing, pilgrims in need can experience the gentle healing touch of the Lord. The sacrament is also a time to thank God for good health and to intercede for friends who are ill and for their carers.

Public Anointing of Sick is available during the pilgrimage season from April – October. 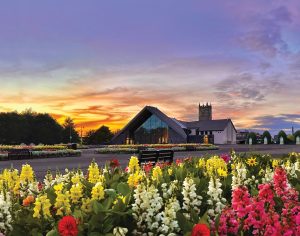 The peaceful atmosphere at Knock Shrine is enhanced by over 100 acres of beautifully landscaped gardens. Meandering pathways wind through fragrant flower beds and shrubberies, where quiet spaces can be found for prayer and reflection.

Knock Museum is an ideal starting point for your visit to Knock Shrine and a delightful experience for visitors of any age. Here you will discover the unique and fascinating story of Knock – covering 140 years of history – and find out why more than 1 million people make the journey to Knock Shrine each year. Knock Museum is accredited to the Museum Standards Programme of Ireland.

Open daily from 10am to 5pm, with free admission.

Water blessed at Knock Shrine is valued and cherished by Knock pilgrims and few leave Knock without filling a container to take home with them. 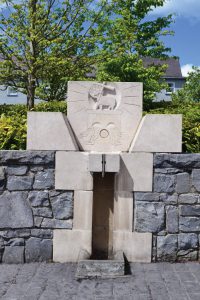 There are 18 outdoor Holy Water Fonts located in front of the Apparition Chapel. Crafted from white Portuguese limestone, the 18 Holy Water fonts by Imogen Stuart each contain a carved relief that depicts scenes from the bible and the lives of the Saints that are connected to water.

Visit one of the Mass Enrolment offices throughout the Shrine grounds. The offices are open  daily from 9am to 5pm.

For over 30 years, Knock Book Shop has built a reputation as an independent book seller specialising in spiritual books and resources. The Book Shop is centrally located in the Shrine grounds. Our experienced team are always at hand to advise you. Choose from a wide variety of topics from spirituality to pastoral resources and health and well being.

Open daily from 9am to 6pm 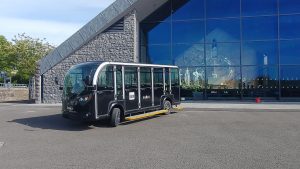 A complimentary shuttle service is available daily at Knock Shrine to assist people who have limited mobility or difficulty walking.

The shuttle is available upon request, just ask at any of our offices or check with  member of staff.

Ireland West Airport Knock  is located 20 Km from Knock Shrine with scheduled services from the UK and Europe.  A shuttle service operates from the Airport to Knock Village.

Knock is 220 Km from Dublin and 70 Km from Galway. It is located on the N17 road, midway between Galway and Sligo.

Bus services are available from all major towns and cities. All bus stops in Knock are within a short walking distance of the Shrine Grounds. For full information including timetables visit Bus Eireann.

The nearest railway station is Claremorris (11 km), which is on the Dublin Heuston – Westport Line. For full information including timetables visit Irish Rail.

All details correct at time of publishing. Subject to change.