The one-year countdown for the World Meeting of Families at Knock Shrine!

There were enormous crowds at Knock Shrine to celebrate the launch of the WMOF 2018 programme ‘Amoris, Let’s Talk Family! Lets Be Family’ which took place at Knock Shrine on 21st August.

To celebrate the launch, families representing each diocese of Ireland were invited to participate in the 3pm Novena ceremony. The Mass began with a special procession, where each family carried  a banner to represent their diocese.

Most Rev Diarmuid Martin, Archbishop of Dublin was the main celebrant for ceremony, which also marked a very special day at Knock, the 21st August which is the anniversary of the Apparition and the Feast of Our Lady of Knock. The choir present on the day were The Lords Choir, led by Sharon Lyons. 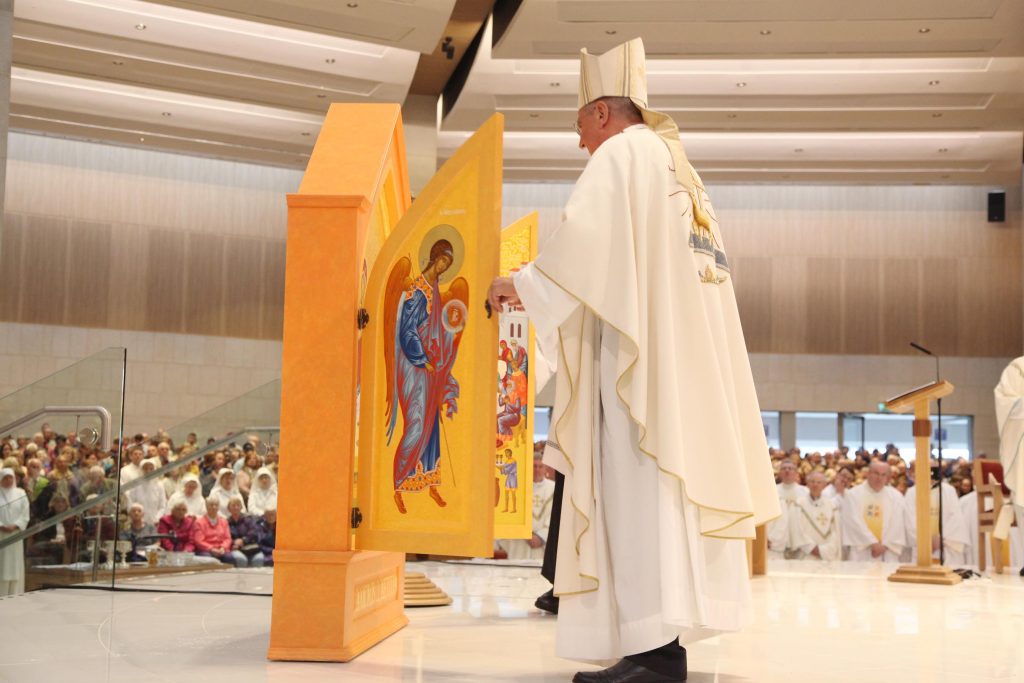 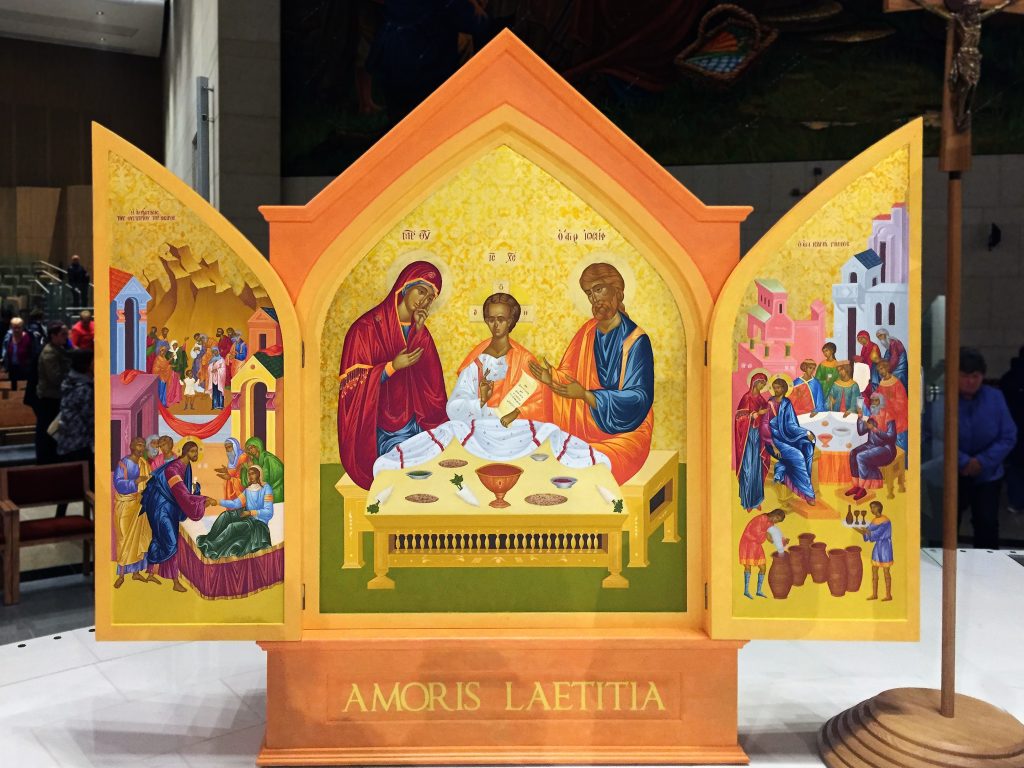 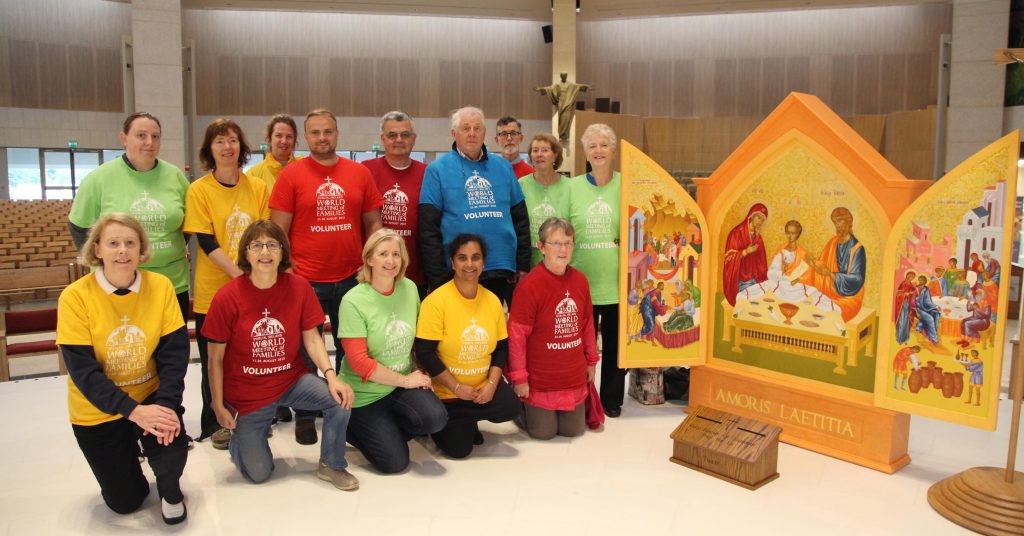 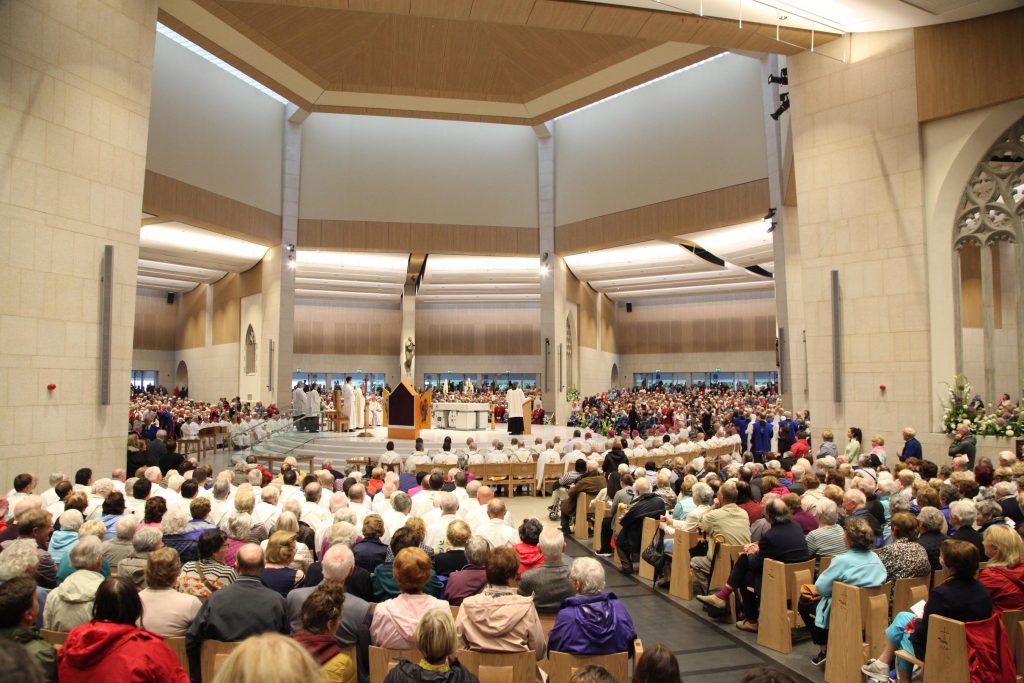 The newly commissioned Icon of the Holy Family was unveiled and anointed by the Archbishop during the Mass and there was much anticipation to see the stunning artwork, which is a triptych style representing the Holy Family in the centre. The icon was written by Mihai Cucu with the assistance of the Redemptoristine Contemplative Community in Drumcondra as part of their ongoing prayer for families. The icon is meant to encourage both reflection and prayer as part of the journey of preparations to World Meeting of Families 2018. Petition boxes were also carried in from each diocese which will accompany the Icon as it travels around the country.

The Icon will travel to the Irish Church’s 26 dioceses as part of the preparation and awareness-raising ahead of the international gathering of the World Meeting of Families from 21–26 August 2018. It will be accompanied by petition boxes and contemplative communities around Ireland have agreed to take petitions collected from families and to pray for them during the coming year.

When the icon is closed, its two doors show the two archangels, Michael and Gabriel, communicating the protection of God. When open, the centrepiece shows the Holy Family who are sitting at a table inviting us to come to their table and share the Passover meal.

Two other scenes from the Gospel which both relate to marriage and family life are also depicted – the wedding feast at Cana and the curing of Jairus’ daughter.

The Archbishop delivered his homily ‘When Plates Fly! Pope Francis on the joys and challenges of family life’. During his homily, he said “There is no family that is ideal, plates fly in every family. There are, however, great families who struggle, at times heroically.”

He underlined that the celebration of the World Meeting of Families would be hypocritical were it to be a celebration that ignored this struggle.

“A civilisation of love must involve the search for a new politics for families, a politics of care for the marginalised and those who struggle.”

The World Meeting of Families will take place in Dublin from the 21st -26th August 2018. Find out more..or Watch the full ceremony below.